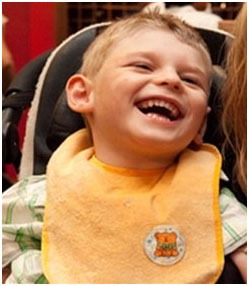 Jack is a happy four and half year old boy who suffers from severe Cerebral Palsy (Spastic Quadriplegia), cortical vision impairment and Epilepsy. After suffering a brain haemorrhage in utero, Jack was initially not expected to survive however he has shown himself to be a fighter and quite the character. He is unable to sit up unassisted, has no speech and requires full time care from his family.

He is learning to gain control over his body as well as communicate using a PODD communication book. At the John Maclean Foundation’s official presentation of funds held at the Urban Hotel in St Kilda February 9th, Jack and his family were presented with $5,000 for a new manual wheelchair. Jack now has his first ever wheelchair is able to get involved in activities with his peers, get around in comfort and is looking forward to going for a run with his Dad for the first time in his new Wheelchair.

Later in the year JMF received an update from Jack Mullan.  Jack’s mum, Belinda, tells us that the chair is fantastic and Jack sits in it incredibly well and appears to be very comfortable which is really great for him. Jack and the rest of the Mullan family will be out in force at the upcoming Melbourne Marathon where the family will be out and about and helping to raise funds for the Cerebral Palsy Education Centre where Jack attends. We were glad to hear that Jack and Team Mullan are doing so well.